The hash rate of the Bitcoin network has also dropped sharply in the last few days due to the global coronavirus pandemic and the collapse of the Bitcoin price. While the hash rate reached an all-time high of 136.2 133 Tera-Hashes per second (TH/s) on March 1st, it fell yesterday close to a 3-month low to 82.2 TH/s. Thus, the hash rate currently also shows a slump of about 40 percent compared to the recent all-time high, as the data from Blockchain.com shows. 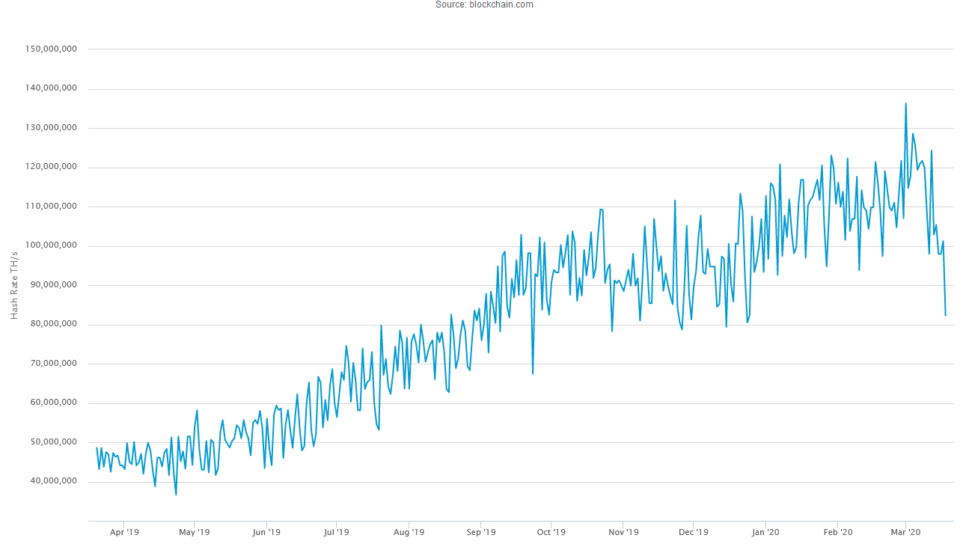 In general, Bitcoin’s hash rate is considered an indicator of the health of the network. It also reflects the support of the miners. Although historically, the hash rate has always been on the rise before the Bitcoin Halvings, this trend, which was also evident this time, came to an abrupt end. However, given the exceptional macroeconomic factors, this is not surprising.

The decline in the hash rate can clearly be explained by the price pressure on the miner. As Glassnode stated in a tweet, it is now unprofitable for many miners to continue their operations. Although Bitcoin mining is highly dependent on geographical location and local electricity costs, even miners who purchase electricity at low prices are affected.

Due to the declining $BTC price, it is now unprofitable for many miners to continue their operations.

Since its peak on March 7th, the 7DMA of #Bitcoin's hashrate has fallen by ~16% – with hashing power disappearing even faster after the drop to $5k.https://t.co/5bnFHpTXfX pic.twitter.com/X9uw8hOCgD

According to data from Bitinfocharts, Bitcoin Mining profitability has dropped to an all-time low of USD 0.0693 per day and per 1 TH/s. Numerous experts expect that many miners could be forced to capitulate if the current price persists or if the price of Bitcoin drops further. As CNF reported, the upcoming Halving in May could further intensify the situation.

Nevertheless, there is no reason to panic. Statements from other news portals that speak of a “dying Bitcoin network” are exaggerated and not true. As Andreas Antonopoulos noted, the Bitcoin network can safely continue to exist even with a tenth of the hash rate.

Effects on the Bitcoin price

On the other hand, there is also a theory that miners, after having to turn off their equipment, increasingly keep Bitcoin and speculate on a price increase, which somewhat alleviates the selling pressure. This strengthens the buying side, which in turn gives miners an incentive to HODL Bitcoin.

At the time of writing, the Bitcoin price has shown an upward trend of 6.8% over the last 24 hours. The next strong resistance is waiting for Bitcoin around the USD 6,000 mark.

Crypto News Flash does not endorse and is not responsible for or liable for any content, accuracy, quality, advertising, products, or other materials on this page. Readers should do their own research before taking any actions related to cryptocurrencies. Crypto News Flash is not responsible, directly or indirectly, for any damage or loss caused or alleged to be caused by or in connection with the use of or reliance on any content, goods, or services mentioned.
Bitcoin BTC
Previous ArticleBank in Italy enables customers to buy Bitcoin
Next Article Chainalysis urges caution: Bitcoin price stable, but volatility increasing