Bitcoin‘s price is struggling to regain strength and seems to remain in a consolidation phase. Analysts agree that the price is at a crossroads and could trend lower if it fails to regain bullish momentum. Technical analyst Josh Rager is cautious about Bitcoin’s price action after it dropped close to $44,000 on several occasions.

According to the trader, the bullish sentiment will resume if the price manages to climb back above $50,000. Otherwise, BTC could continue to drop until it finds support at $40,000. However, Rager does not expect any major moves this Saturday, as Sunday and Monday are traditionally notorious for major price movement.

Although there have been several bullish announcements in recent days that normally could have given Bitcoin momentum, the price appeared indifferent to the outcome of the Tether lawsuit and the new purchase of MicroStrategy for nearly $1 billion. This signals to Rager that the market may have capped out:

(…) when the price stays down, I tend to worry if it stays in support for too long.

However, BTC price action could accelerate due to the passing of the U.S. federal government’s $1.9 trillion new relief package with checks of up to $1,400 to be sent to citizens.

At least in 2020, this was bullish news – first because some citizens reinvested their money in assets such as Bitcoin to increase their profits. According to the “Bitcoin Stimulus” monitor, citizens who invested their $1,200 in Bitcoin last year made a 747% profit when BTC reached its all-time high.

Second, institutions have sought to diversify their portfolios into Bitcoin and other high-yielding assets to hedge against dollar inflation. By expanding the monetary base, investors fear that holding high amounts of cash could prove detrimental to their companies in the long run. At least, this is the argument behind MicroStrategy’s treasury strategy and others who have invested in BTC.

Consistent with the levels set by Rager, IntoTheBlock estimates that the price will have support at $45,000 and $46,390 due to the “In and Out Money Around Price” (IOMAP) metric. As the image below shows, there is a strong accumulation of 320,000 addresses that bought 148,000 BTC when the price was in that price range.

If that support is broken, the price could drop to $39,454 or $40,877 until it finds support. On the hand, IntoTheBlock registers the first major resistance

Bitcoin supply on the market continues to decline

Data from Glassnode indicates that Bitcoin’s “liquid” supply has been declining. The research firm estimates that of the approximate 18.6 million BTC mined only 1.2 million are liquid and 3 million “highly” liquid, the remaining 14.5 million are “illiquid.” Glassnode shared the image below and concluded:

Only 4.2 million BTC (22%) are currently in constant circulation and available for buying and selling (…) we can see a clear upwards trend of Bitcoin illiquidity. This is indicates that the present bull market is driven by the staggering amount of illiquidity. 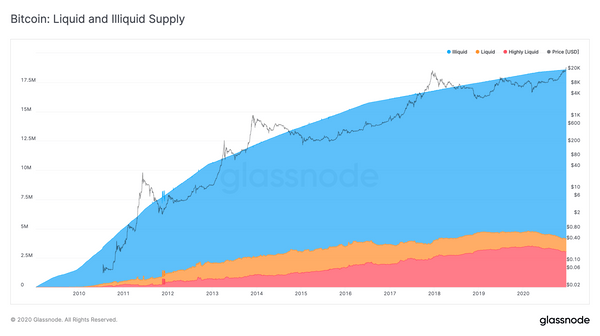