New data emerge showing how Bitcoin adoption is on the rise. This is confirmed by a new survey, conducted by the Central Bank of Canada. In this country, unlike the United States, there is a positive attitude towards cryptocurrencies. The survey would have been conducted to measure the attitude of citizens towards Bitcoin.

The name of the survey was “2018 Bitcoin Omnibus Survey: Awareness and Usage” (BTCOS). It was used by the Central Bank of Canada to measure the level of knowledge, the number of owners and the general use of cryptocurrencies in the country.

The last time the country conducted a survey was in 2018, right after the price of Bitcoin has fallen. At that time, according to the report published in the survey, 5% of the people interviewed owned Bitcoin. Aged between 18 and 34. Of that percentage, 50% said to have acquired them as an investment. All of the above represents an increase of 2% in terms of Bitcoin ownership over 2016. In the knowledge segment, 89% of respondents said they had heard of Bitcoin.

According to the survey, 3% of Canadians have owned Bitcoin in the past year. This can be seen in the graph, in green. However, perhaps as a result of the bear market in 2018, the survey reveals that Canadians have continued to buy Bitcoin. The amount has increased by at least 1% over previous years (as shown in the graph). 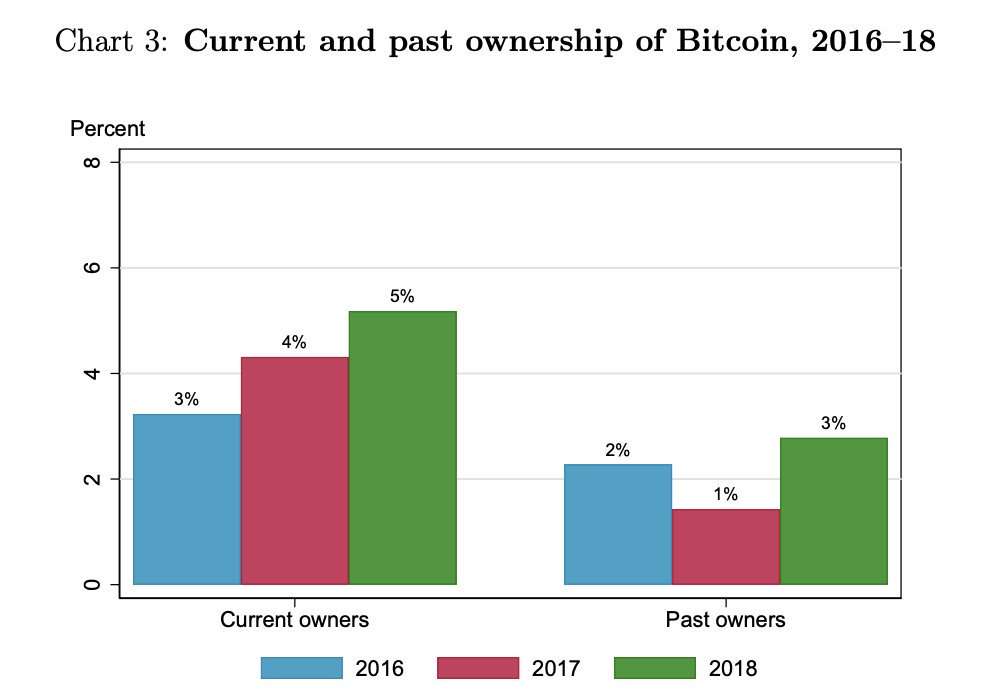 In addition, the report reveals that the increase has occurred unevenly in the above demographic group (persons aged 18-34). Only those who have a university education, with an annual income exceeding USD 70,000, have increased their Bitcoin tenure in recent years.

Bitcoin as a store of value

The survey delves into other interesting details. For example, it reveals that at least half of the Bitcoin owners surveyed own other digital assets like Ethereum or other cryptocurrencies. In total, this would represent 3.2% of the Canadian population.

The most interesting discovery is that Canadians who own Bitcoin use it as a store of value. This is because they distrust traditional banking systems. It appears that bitcoin adoption will only grow over time if this trend continues.