A report published by the Kansas City branch of the Federal Reserve in the United States attempts to dismantle the Bitcoin narrative as digital gold. The report, entitled “Safe Haven Performance in the Age of Bitcoin,” was released on April 15 of this year.

The report compares the performance of Bitcoin, gold and 10-year treasury bonds in times of financial tension. In addition, the report attempts to measure whether there has been a change in the return on the latter two assets following the emergence of Bitcoin. To this end, the correlation between the daily returns of these assets and the daily returns of the S&P 500 were measured. Furthermore, the report examined the correlation between the above-mentioned assets over a period of 25 years, from 1995 to 2020. Regarding the methodology, the report went on to explain:

We separate the sample into periods in which financial stress was either above or below its long-term average using the Kansas City Financial Stress Index (KCFSI). Although assets are only considered safe havens in times of stress, we include periods without stress to capture any changes in asset behavior between the periods.

Otherwise, a special period between February and March of this year was identified due to market conditions caused by the COVID-19 pandemic.

Correlation between Bitcoin and gold

According to the report’s findings, gold and Treasury bonds are negatively correlated with the S&P 500. This suggests that the assets behave as safe havens. In contrast, the report states that Bitcoin has a positive correlation with the S&P 500. Although the correlation is weak, the report claims that this suggests that BTC is “behaving more like a risk asset than a safe haven,”. The figures can be found in the table below.

On the other hand, the report represents an individual assessment of assets in times of financial tension and without financial strain. When examining assets under these conditions, the report concludes that safe havens are not constant. On the other hand, gold and government bonds may behave more like safe havens in some periods than in others, but only the former has done so consistently. The report concludes that Bitcoin has not acted as a safe haven in any of the periods examined and that the emergence of Bitcoin has had little impact on the other two assets:

(…) 10-year Treasury consistently behaves like a safe haven: the correlations for the 10-year Treasury are negative and statistically significant across all stress periods. In contrast, gold has only behaved like a safe haven in certain periods of financial stress. Finally, Panel B shows that Bitcoin has failed to exhibit the behaviors of a safe-haven asset—its correlations with the S&P 500 are not statistically significant in any period and positive in all but one. 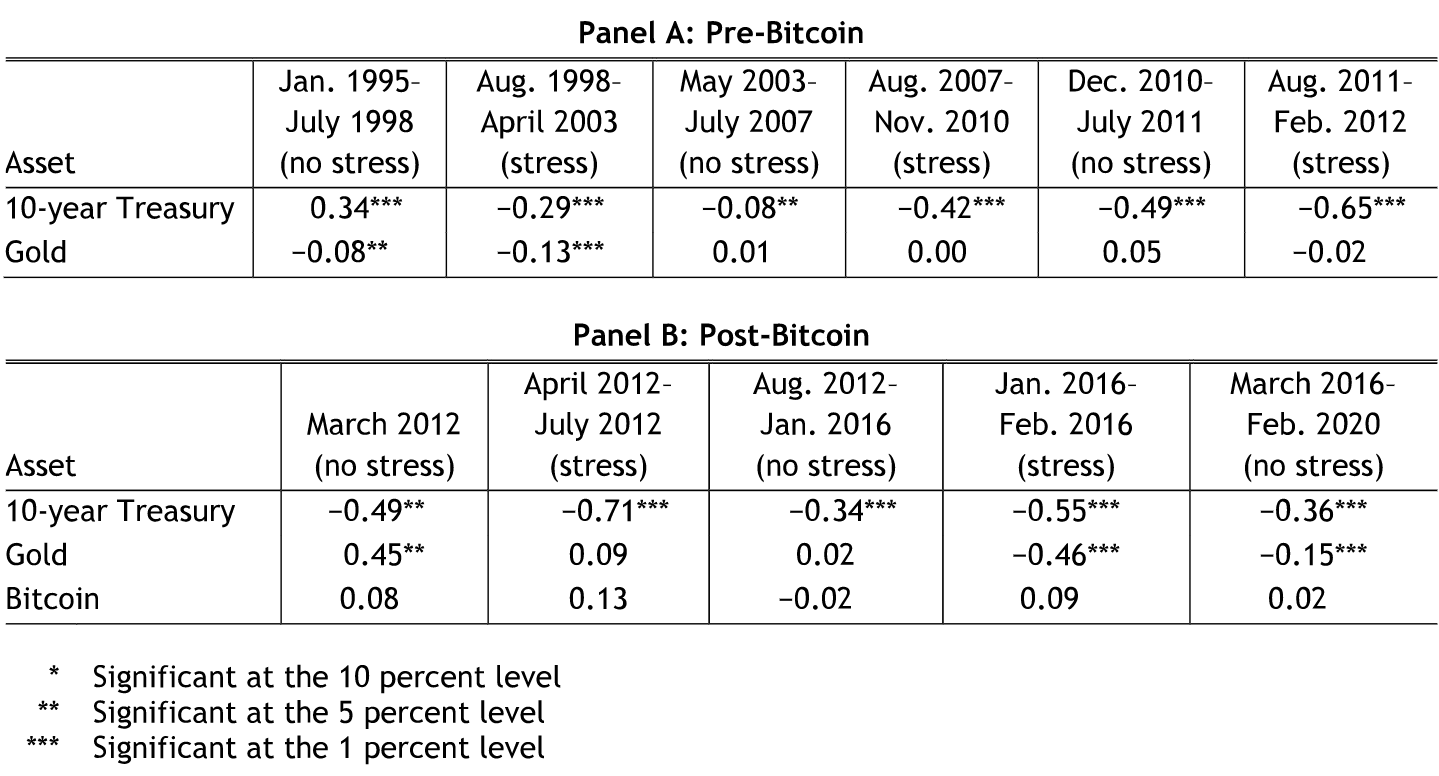 Source: Historic Correlations with the S&P 500 in Varying Periods of Stress over Time. Source: https://www.kansascityfed.org/en/publications/research/eb/articles/2020/safe-haven-performance-age-of-bitcoin

Importantly, the report notes that during the most recent crisis period, from the end of February to May 2020, none of the assets functioned as a safe haven. With regard to 10-year government bonds, the report finds surprisingly that these remained safe havens until February 2020:

The result for the 10-year Treasury is somewhat surprising, as it was a safe haven for every stress period from 1995 through February 2020, regardless of duration. Although its correlation with the S&P 500 in March 2020 is still negative, it is not statistically significant.

Bitcoin and gold recently showed a positive correlation with the S&P 500. Although the correlation of gold with Bitcoin is much lower, the report concludes that neither asset has consistently proven to be a safe haven in periods of financial stress.