Bitcoin’ price has briefly touched $55,500 and as in previous market updates, analysts remain extremely bullish. While Bitcoin is battling $50k, analysts identified one major battleground: Coinbase, one of the most popular crypto exchanges in the world and at the same time a popular place for investors with a lot of capital. Bitcoin Archive reported:

#Bitcoin supply is plummeting on Coinbase, even as the price is going up. Supply crisis is here… FOMO is kicking in 🚀

Meanwhile, CryptoQuant CEO Ki-Young Ju pointed out that the battle for the $50,000 mark is a battle between Coinbase whales (USD) vs. stablecoin whales (USDT). As Ju stated, the Coinbase price premium is currently in the red, while a huge amount of stablecoins is deposited on the exchanges at the same time. Therefore, a further cooling of the market is needed first before BTC can make a clear break above 50.000, according to Ju.

Coinbase’s premium is usually in the positive when Bitcoin price breaks through resistance and manages to consolidate at a new all-time high. It also reflects institutional participation which, for now, appears to be minimal.

Indicators suggest that Bitcoin is halfway

As for the momentum of the crypto market, the trend seems to remain bullish nonetheless. Whalemap Monitor data shows that Bitcoin’s realized capitalization is at 74.4% which means that a macro top at $50,500 is unlikely:

One of the best charts for macro tops: Realised cap HODL waves. It basically shows the FOMO levels of short term hodlers- the stronger the fomo the higher the wave. Historically, values of more than 90% signified macro tops. We are at 74.4% now, so BTC still has some room to grow. 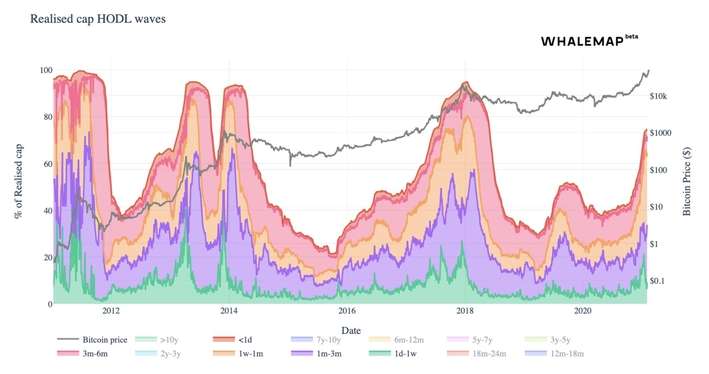 Agreeing with this, Capriole Investments founder Charles Edwards said that all indicators currently suggest that Bitcoin is only halfway through the bull run:

If this Bitcoin bull run is like 2017, we are about half-way. Price action, HODL waves, DNVT, everything looks like June-August 2017. The difference is we now have 20% monetary inflation, so I expect we are less than half-way, as this has a ratcheting factor.

Analyst Willy Woo has concurred that Bitcoin is near half of its bull cycle. By the end of 2021, BTC’s total financial market capitalization could catch up to gold, driven by a macroeconomic environment that will benefit assets trading as a store of value. Therefore, Woo believes this bull market “is like no other”.