After reaching a new high and a market capitalization above $1 trillion, the sentiment around Bitcoin seems to be more bullish than ever. The cryptocurrency has destroyed many analysts’ predictive models and could dive deeper in uncharted territory. As for the time of publication, Bitcoin was trading at $57,156 with gains of 5.89% in the last 24 hours. On the weekly and monthly charts, Bitcoin is up 18.19% and 57.47%, respectively. The market capitalization stands at $1.04 trillion.

Research firm Santiment has laid out the bullish and bearish case for Bitcoin after the cryptocurrency hit its new high with a 219% rally in the last 3 months. On the bullish side, Santiment points out that BTC supply continues to fall on leading exchanges.

Therefore, Bitcoin selling pressure continues to decline thus allowing the rally to endure. On the bearish side, Santiment indicates that the funding rate in the futures market for BitMEX shows that traders with short positions are receiving greater incentives to bet on lower levels in BTC price.

Right in the middle of the bears and bulls are the tweets from CryptoQuant CEO Ki-Young Ju. Still mindful of Coinbase’s premium that went negative during the $56,000 rally, Young Ju said that buying power has come from “stablecoin whales and retail investors.” Consequently, Young Ju believes the price has moved into “unhealthy” territory due to a lack of new dollar inflows on the spot market. He added:

It’s not necessarily a short signal, but be careful if you’re a derivative trader. 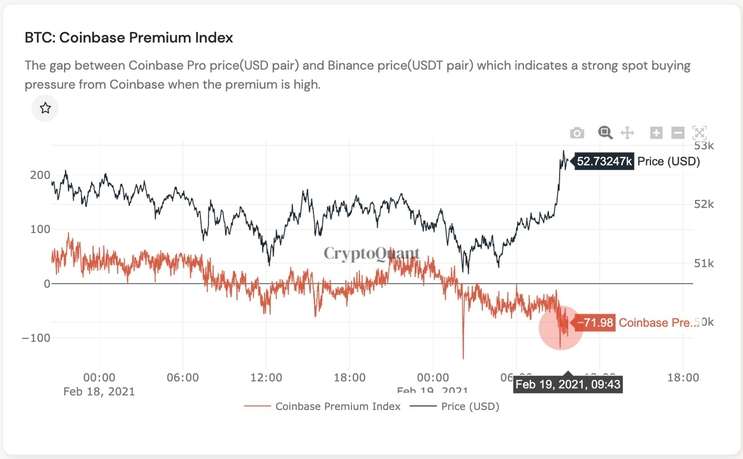 On the capital inflow into BTC, Data analyst Rafael Schultze-Kraft has revealed that less of the cryptocurrency is being sold in current price ranges than when it hit $30,000.

In other words, bullish investors have been less incentivized to take profits as BTC continues to rise. Therefore, Schultze-Kraft marks the range between $48,000 and $52,000 as a support level. However, the market could be heading into the “euphoria/greed zone,” as indicated by the Unrealized Gain metric that has remained unchanged since BTC hit $41,000.

In the long term, the increase in market capitalization indicates that Bitcoin could receive more attention from institutional investors. The cryptocurrency would then cement itself as the gold of the digital age. Bloomberg Intelligence Senior Strategist Mike McGlone has approached Bitcoin with an “institutional point of view” and has predicted that by 2024 and beyond, Bitcoin will be even more valuable than gold.

McGlone believes it has been “easy” for Bitcoin to rise 4 to 5 times its price due to the reduction in new BTC issuance after the 2020 halving, increased demand, and macroeconomic conditions.

As IntoTheBlock analyst Lucas Outumuro noted, Bitcoin has now reached 9.4% of gold’s market capitalization, meaning Bitcoin’s price would have to increase more than tenfold to overtake gold. If that happens, each Bitcoin would be worth an estimated $500,000, Outumuro said:

Not expecting this to happen overnight, but rather as a generational paradigm shift. Exciting times for Bitcoin and blockchain broadly.