Bitcoin remains above $40,000 after weeks of crushing all-time highs. Although the bullish trend seems unstoppable, many traders remember 2017 when BTC’s price plummeted in a few days after reaching $20,000. Analysts and investors are sailing in uncharted territory and therefore share the same question, when will BTC hit its peak?

The well-known YouTuber “Crypto Daily” published a video, trying to answer this very question. The analyst tried to determine a price at which investors could take profits, but pointed out that Bitcoin is in a price discovery. Therefore, any analysis or prediction lacks historical support.

Nevertheless, in order to make a prediction, Crypto Daily used the Fibonacci retracement tool, which has proven to be one of the most reliable tools in the history of technical chart analysis. However, in regard to this, Crypto Daily also noted that it is quite rare for an asset to target the 1.2 level.

This is precisely what Bitcoin is doing right now, which is why the analyst has set $44,000 as the next resistance level for the BTC price. If the cryptocurrency rises above this level, the analyst expects Bitcoin to target the level of 1.6 on the Fibonacci sequence, which would mean it could target $64,000.

Also, Crypto Daily recommended its followers to take profits in this price range if “you absolutely have to.” Nevertheless, Bitcoin’s rally could persist longer, as it “has not yet reached the profit levels” of past bull markets. In 2017, for example, Bitcoin posted gains of 5,000%. In comparison, the cryptocurrency is currently showing gains of only about 300%.

In accordance, Bloomberg Intelligence’s latest report states that Bitcoin is in a similar state as it was in May 2017. At that time, the benchmark cryptocurrency met resistance at the $3,000 mark after rising from $1,000 and presented a correction before reaching its all-time high of that year at $20,000:

We suspect more of a time correction is likely as Bitcoin may have entered a paradigm shift of mass adoption on a global scale. 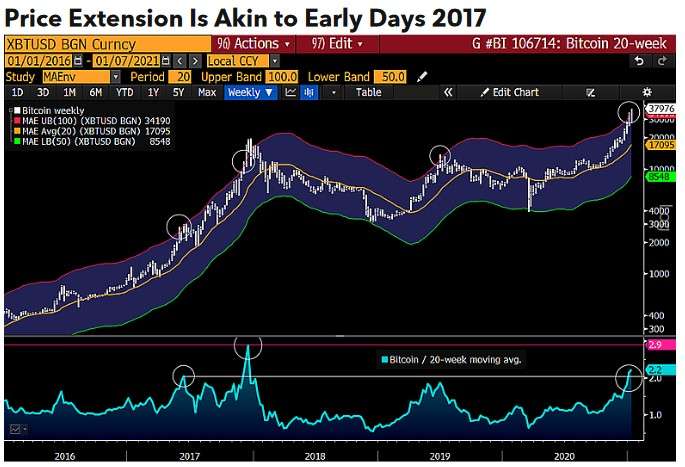 Crypto Daily also cited the “Rainbow chart”. According to this tool, the current bull run will exceed all predictions and still has a lot of room to the upside. This instrument is used to predict the future price of Bitcoin based on a logarithmic regression supported by the past behavior of its price. 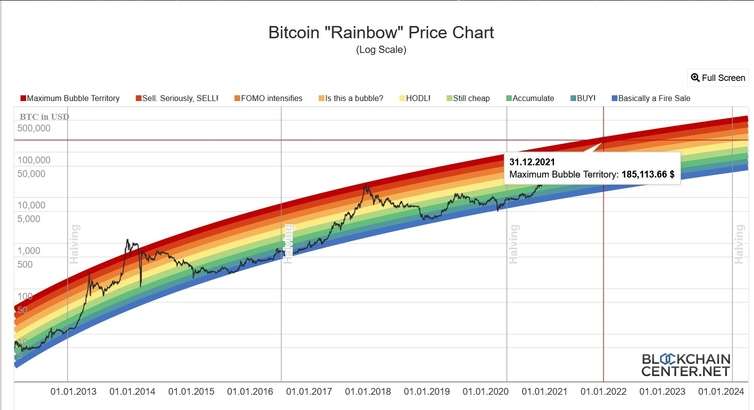 The graph is currently above the yellow band representing the time when investors should hold their funds (“HODL”). However, it has moved to the orange band that represents the moment when investors wonder if the market is in a bubble. When it reaches the red band at the end of 2021, the price of Bitcoin could be at $185,000, according to the rainbow chart.

Behind the Bitcoin rally are 3 key factors, according to Crypto Daily: institutional investment, the measures of the U.S. Federal Reserve (FED) to mitigate the economic crisis caused by the Coronavirus, and the participation of Bitcoin buyers and sellers. These factors have led the market to a “supply shock”.

Institutional buyers are expected to invest more than $5 billion in Bitcoin during 2021 to “get to the hardest asset” in an economic environment inflated by the printing of money from the FED and major central banks around the world. And with Joe Biden already announcing the next big stimulus package, there is currently no end in sight to the trend, as Crypto Daily stated:

There is a confluence of two opposing influences that have met in an explosive way: Buying FOMO mixed with FOMO hodling (…) The demand is through the roof and the supply is gone, if you look at the balance books of the exchanges, is just air (…)