After the strong upward movement from around USD 9,000 (end of July) to up to USD 12,500 (mid-August), Bitcoin is still in a consolidation phase. Over the past weekend, the price has largely trended sideways. At the time of writing, BTC was trading at USD 11,770, with a slight gain of 1.2% within the last 24 hours.

“Big Cheds” shared a Bitcoin chart analysis with his 80,000 Twitter a few hours ago, in which he noted that there is currently no fixed direction in which the Bitcoin price is headed. As the analyst noted, Bitcoin closed below the EMA8 (Exponential Moving Average of the last 8 days) on the daily chart, but BTC is also currently charting a series of higher lows, which still show a reasonable degree of bullish sentiment.

The analyst also stressed that Bitcoin is trading above the important level of $10,500 after the rapid rise in recent weeks, which is another reason to be bullish. However, there were some initial rejections in the low $12,000 zone, so it is not clear at this point how things will continue. Big Cheds is therefore currently watching the low time frames:

So really looking out for lower time frames, watching on the 1-hour chart, several moving averages, we do have the 8-EMA as well as the 34-EMA […] [they]did a bull cross several hours earlier today with a little bit of fall through.[…] What will be key in this lower time frame analysis will be to recapture this lower key right around $11,750, if we can break that I think there is a good chance that we will go back to $11,9k.

If this level is breached, Big Cheds said, the next steps would be to challenge the August 17th high of just under $12,500. At the same time, the analyst also warns keeping an eye on the higher lows on the daily chart.

Many analysts currently share a similar view to Big Cheds’ that Bitcoin could consolidate in the current trading range in the coming days, perhaps even weeks. For example, analyst “Mayne” shared the chart below via Twitter, explaining that Bitcoin has formed the same bearish divergence against the Relative Strength Index on the daily chart as it has recently consolidated after the May highs.

RSI Divergence peeps, what are your thoughts on the big daily bear div on Bitcoin? I don’t use RSI but looks like we had a bear div during the last consolidation as well. 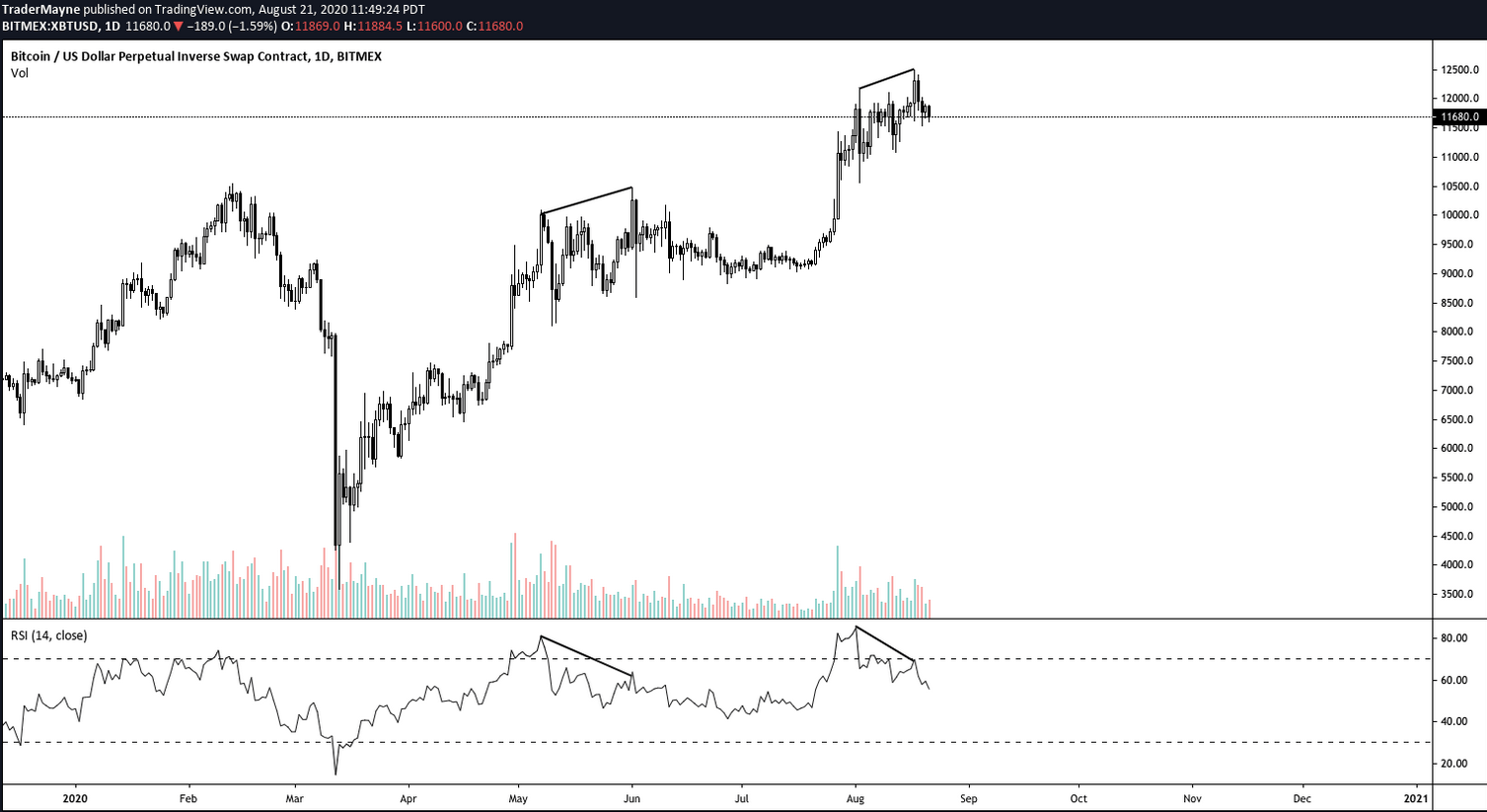