Earlier this week, the world’s largest cryptocurrency Bitcoin (BTC) witnessed a major crash with its price tanking under $30,000 for the first time in 10 months since July 2021. However, Bitcoin (BTC) did manage to recover partially but continues to show weakness.

Read More: Why Wednesday’s U.S. CPI inflation numbers could be a make or break event for Bitcoin (BTC)As of press time, Bitcoin is trading 4 percent down at a crucial support level of $30,505. Later today, the United States shall be announcing the inflation data for April 2022. This could be a potentially deciding factor for the future price movement of Bitcoin and the broader crypto market.

Crypto analyst Lark Davis explains that Bitcoin is currently trading at crucial support levels. During the previous two times, BTC was trading at these levels, it bounced back from the $28K-$29K levels. However, if Bitcoin fails to hold these support levels, the next area of meaningful support shall be at $22,000.

As well as being where the 200 week MA comes up, the area at 22k is the next meaningful area of price support too. #bitcoin pic.twitter.com/KvLfGr9B3y

Furthermore, Bitcoin’s relative strength index (RSI) has been oversold on the daily charts. This serves as a good buy signal as the price of Bitcoin usually rallies for weeks following this signal. However, Davis adds “BUT BUT BUT in many cases the price does make one final dip before pushing higher”. On the weekly chart, Bitcoin is still not in the oversold territory. Davis writes:

If yesterday was not the capitulation bottom and 28k does not hold in the coming days, then the next key level to watch IMO becomes the 200-week moving average around 22k for Bitcoin. * Weekly RSI has not hit oversold, in this scenario it would likely. 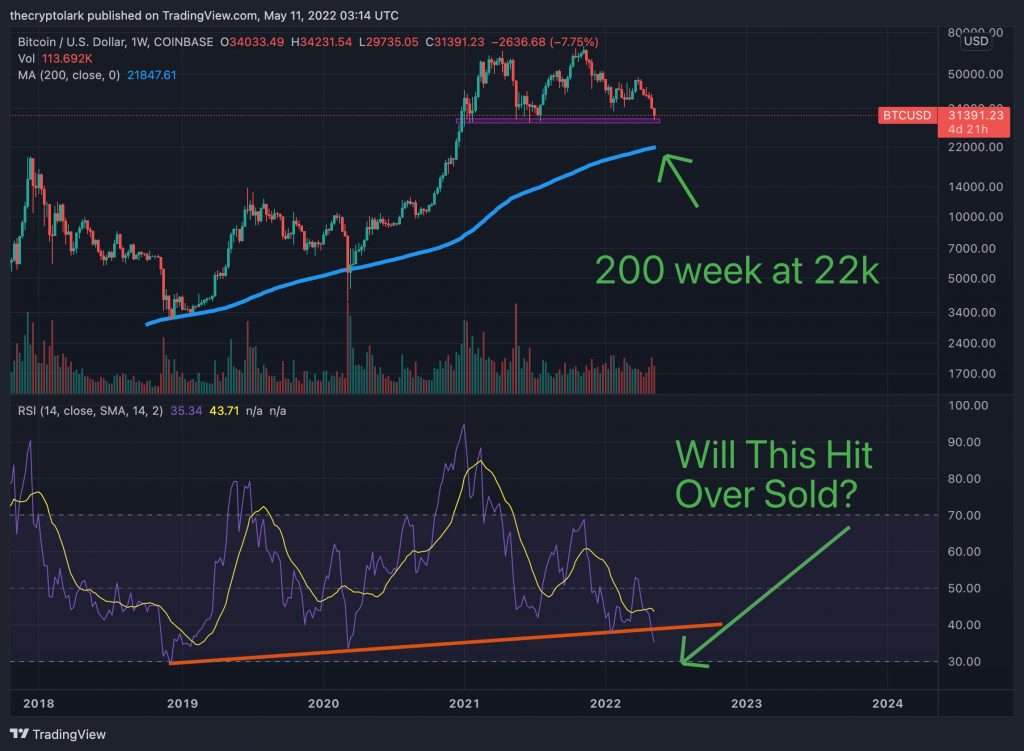 The Crypto market loses $800 billion in a month

Bloodbath in the broader cryptocurrency market continues further. The overall crypto market is down 6.3% as of press time. Since the beginning of April 2022, more than $800 billion worth of investors’ wealth has been eroded. This means nearly the crypto market has lost a whopping 33 percent of its valuation just within a matter of 40 days.

Currently, Bitcoin makes up 40% of the entire crypto market. Over the last month, Bitcoin itself has lost nearly 25 percent of its valuation. On-chain data provider Glassnode reports reports:

Bitcoin remains highly correlated to the broader economic conditions, which suggest the road ahead may unfortunately be a rocky one, at least for the time being.

On the other hand, blockchain analytics firm CoinShares has recently shared its weekly report. It adds:

Bitcoin saw inflows totalling US$45m, the primary digital asset where investors expressed more positive sentiment, with total assets under management (AuM) falling to very similar levels seen during the lows in sentiment seen at the beginning of the year.