Bitcoin is moving towards $50,000, after setting a new all-time high above $49,300. Although analysts expected a breakout into uncharted territory, many are questioning whether the cryptocurrency’s drive is strong enough to sustain the rally.

Trader “The Wolf of All Streets” explained that the Bitcoin price managed to rise above this level after 7 rejections at $48,200. Melker expects a breakout as “consolidation below resistance usually leads to a break up.” In his opinion, the next resistance could be at $60,000.

Consolidation below resistance usually leads to a break up. pic.twitter.com/zh3FhMzDcH

However, CryptoQuant CEO Ki-Young Ju believes “it will be tough” to break $50,000. Young Ju records a negative $45 premium on the Coinbase Pro service. Previously, Bitcoin has managed to reach new highs when the premium was also high, indicating strong institutional participation. On that note, Ki-Young Ju shared the chart below and stated the following, advising caution to investors:

The current buying power is not coming from Coinbase. There is no more premium from Coinbase compared to Binance/Huobi/OKEx. Beware. 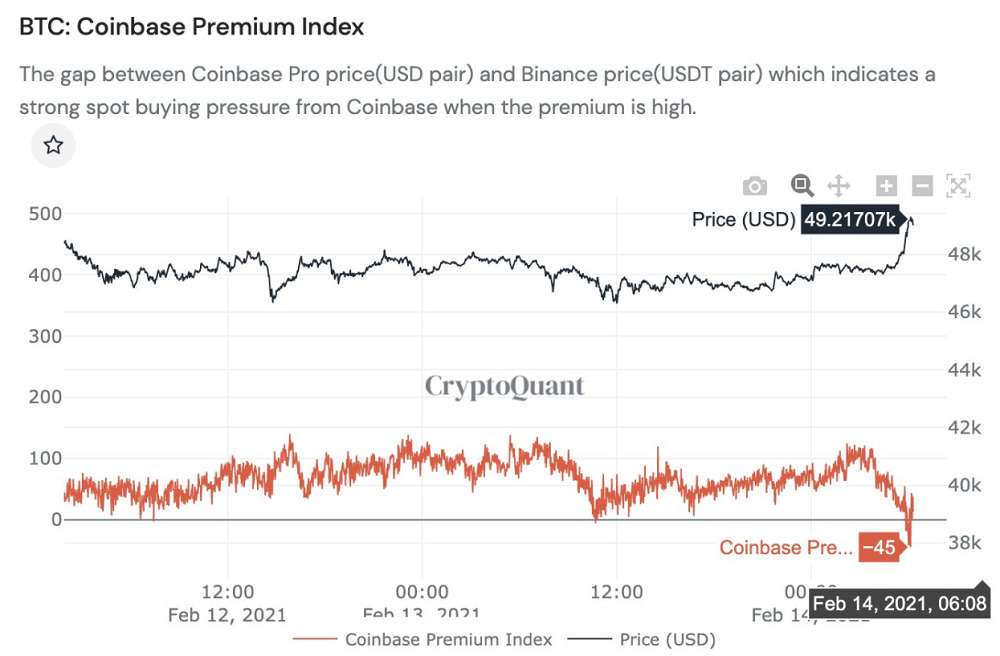 Where is the investment in Bitcoin coming from?

One possible reason for the new momentum could be the news that Morgan Stanley might step in with a $150 million investment in Bitcoin. Trader Michaël van de Poppe has been bullish about this possibility:

It’s unstoppable. One by one they will want to get in and at some point they will have to get in. It’s that cycle.

If the price of Bitcoin manages to rise above $50,000, it could receive a new influx of investors, according to Josh Rager. With a price above that range, Rager has predicted a “flood” of new institutions investing in Bitcoin that could continue to push the price to new highs. On this possibility, one crypto investor stated:

Funding rates throughout the weekend can become very unsustainable. Price moves in a cyclical manner. So if we rally today, chances are we nuke in the next 24H to flush out late market participants.

Analyst Ben Lilly is looking at data from CryptoQuant to identify good buying opportunities. According to his analysis, Bitcoin has historically dumped when large inflows happen. This is a bearish indicator since Bitcoin tend to flow to exchanges to be sold. Comparing this indicator with Grayscale’s price premium, when it is below 5%, investors can find good buying opportunities, according to him. Based on this, he stated:

January 30th was the last time we hit the shakeout zone, making it an ideal time. And with the average inflow still high, now is still a good entry point.