The global markets have come under heavy correction today, and so does Bitcoin and the overall crypto space. The entire crypto market is down by 7 percent slipping under $2 trillion levels.

Bitcoin is also down by over 7 percent slipping under its crucial support of $45,000. As per popular crypto analyst Colin Wu, the crypto market correction is an outcome of the crash in Hong Kong’s Hang Seng index that plummeted 7 percent earlier today.

The Hang Seng Index fell 3.3%, its biggest one-day drop in the past eight weeks. Among them, the two Evergrande bonds will usher in the interest payment date on Thursday, and the stock price plunged nearly 19% during intraday trading, setting a new low since June 2010.

Colin wu further noted that the Hang Seng index correction had a broader impact on the global market as well as the crypto market. China’s second-largest real estate company is holding a massive $2 trillion in debts.

The risk of spillover from Evergrande’s debt has made the global market jittery. As of early trade on Monday morning, the Dow Jones futures are also down by 450 points. This coupled with the fears of Fed tapering its easy monetary policy has put the markets under pressure. The below graph from Bloomberg shows that BTC and the S&P 500 have been moving in tandem ahead of the Fed decision. 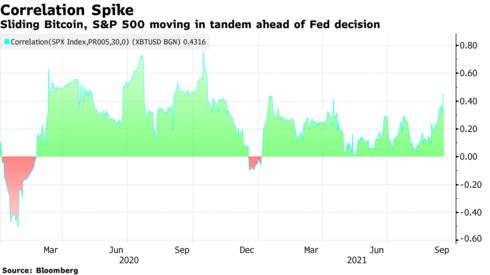 Apart from Bitcoin (BTC), the crypto market correction has dragged altcoins even lower. The overall altcoin space has lost more than $120 billion in the last 24-hours.

As of writing this story, all of the top ten altcoins have corrected by more than 10 percent. This is the first major sell-off in the altcoin space after a strong rally over the last few weeks.

Some of the top altcoin performers like Ethereum (ETH), Solana (SOL), XRP, Polkadot (DOT), Avalanche (AVAX) are all down by 10-15 percent. September has relatively been the month of correction over the last decade in the history of the crypto market.