The Bitcoin price shows gains after spending a few days with sideways movement. At the time of publication, Bitcoin is trading at $50,616 with gains of 5.25% in the last 24 hours. On the weekly and monthly charts, Bitcoin shows gains of 9.22% and 38.40% respectively. The market capitalization stands at $950 billion and is approaching its peak at $1 trillion.

As CNF reported, last week was very important for the traditional market and cryptocurrencies. The statements made by the chairman of the US Federal Reserve, Jerome Powell, failed to “meet” investors’ expectations. This resulted in a drop in key markets and, due to the high correlation, Bitcoin’s price.

Some analysts expect the correction to continue until the end of March. However, the cryptocurrency has reacted positively following the confirmation of the new stimulus package’s approval by the U.S. Senate. Valued at $1.9 trillion, the package is a measure to counteract the economic effects of Covid-19.

Trader Michaël van de Poppe has been bullish on the announcement and expects Bitcoin price to “go to the moon”. In the short term, the trader is still cautious and has marked $47,000 as primary support.

As long as BTC cannot break resistance at $50,000, Poppe expects the trend to remain bearish with “market-wide weakness in the near term,” as the chart below shows. BTC’s price could drop as low as $40,000 if it does not gain enough momentum. 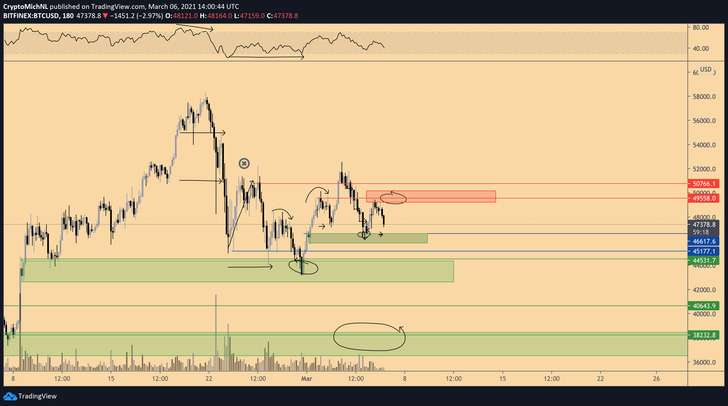 In that regard, the firm Santiment has recorded an increase in bearish sentiment on BTC in social media platforms. According to the firm, the community has had a low reaction to Bitcoin’s price action and has been at their “most bearish” since early October 2020.

As similar reports have shown in the past, when community sentiment is bearish it is a “good time to buy,” according to Santiment. In the chart below it can be seen that in October 2020, the bearish sentiment was followed by positive Bitcoin price action.

In support of the above, data from CryptoQuant indicates that institutions that have purchased BTC since the end of 2020 “have not moved their BTC,” as the platform’s CEO Ki-Young Ju stated. This data is taken from transaction activity on Coinbase – the exchange is the preferred site for BTC purchase by institutions.

Glassnode data also indicates that the Spend Output Profit Ratio (SOPR) has reset and indicates “high conviction” in Bitcoin owners and new investors. Therefore, Glassnode claims that coins that have been bought in recent months have remained unmoved during the latest market downturn; investors refused to sell their BTC at a loss. 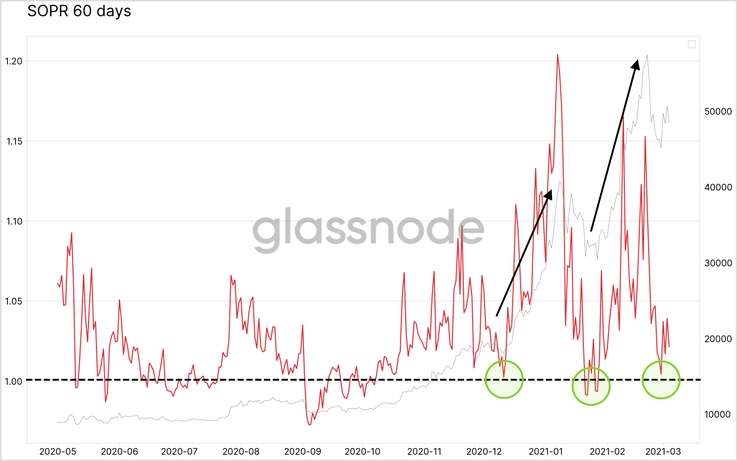 Based on BTC’s historical performance, Capriole Investments founder Charles Edwards stated that BTC’s rally has been one of the “fastest and most extended” ever. Therefore, he believes the price could fall further or receive more institutional incentive to resume its bull run.