It has been a week since the inauguration of U.S. President Joe Biden. The crypto market and its various players are currently sizing up the new administration to see if it will continue with a monetary policy similar to the one implemented by the Trump administration. In the medium term, the biggest winner could be Bitcoin and its investors.

Analysts seem to agree that the U.S. government will not only continue with the “infinite money policy,” but could expand the money supply even further. Federal Reserve Chairman Jerome Powell is expected to offer comments on the U.S. economic outlook today.

Bitcoin has benefited in the past from the Fed’s increased money supply and policies. Just like gold, the cryptocurrency is considered a safe haven by institutions. Over time, this thesis has been strengthening and has gained more interest from institutions that pushed the Bitcoin price to new all-time highs.

In his statements, Powell could try to ensure that the institution’s main strategy will not be to immediately increase debt and could pose a moderate stance. In the short term, this could affect the Bitcoin price that has been consolidating in the low $30,000 range.

The market seems to be on hold as to what actions the Fed will take. A report from Ecoinometrics indicates that U.S. debt continues to rise with the Fed “slowly but surely” increasing its ownership of it, as shown in the image below. 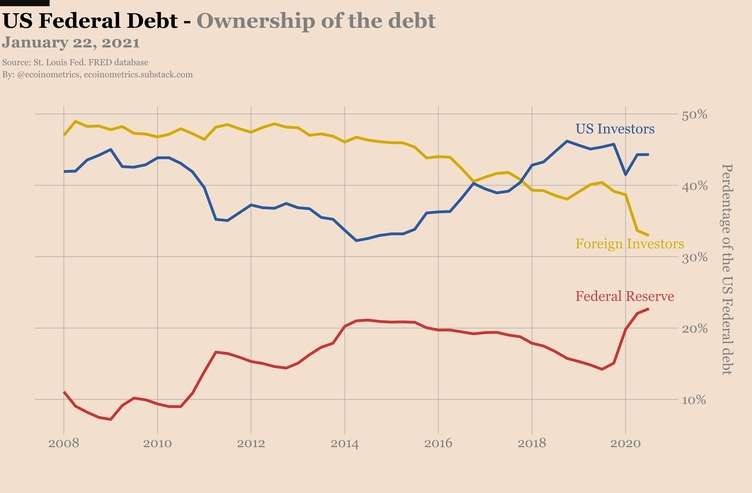 Despite the comments Powell will give, it seems likely that this trend will continue. In the first quarter of the year, the Biden administration may issue a new stimulus package, expanding the dollar’s monetary supply and further increasing U.S. debt. As a result, there will be higher inflation and a loss of purchasing power of the dollar. 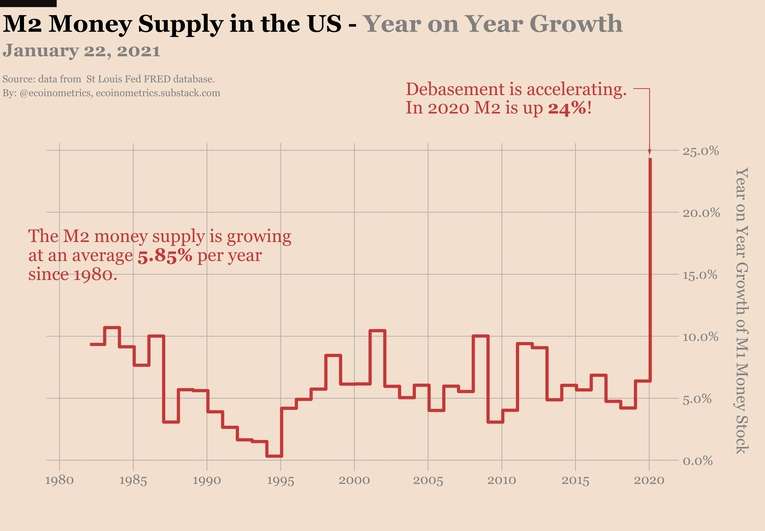 Ecoinometrics predicts the beginning of a process of “debt monetization” that will create fear of inflation, monetary debasement, and negative yields in banks. In 2020 something similar happened and investors took refuge in BTC. This could have highly bullish implications for the cryptocurrency throughout 2021. The report concludes:

The US monetary policy outlook is very limited and the most likely scenario is a tailwind for Bitcoin.

As mentioned above, Powell’s comments could gain investor confidence in the near term. Therefore, institutions would not be pressured to buy Bitcoin, gold, and other hard assets in search of preserving their wealth.

In addition, data from the platform CryptoQuant indicates that Bitcoin miners in China have begun to take profit since the cryptocurrency reached its all-time high. CryptoQuant CEO Ki-Young Ju indicated that the Bitcoin miner position index is at an 8-year-high, as shown in the image below. 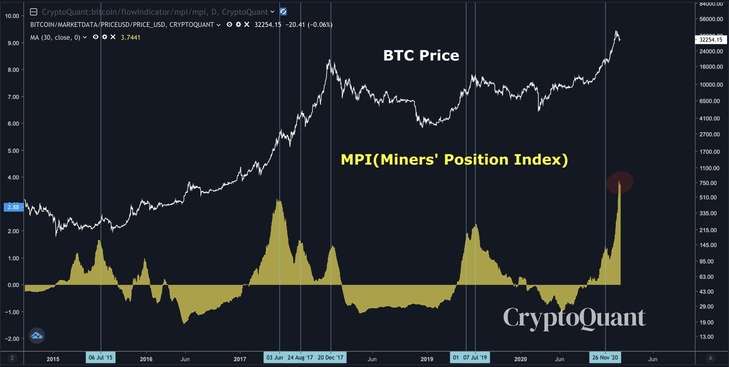 This metric measures the number of coins sold by Bitcoin miners. Stating that this strengthens the bearish case for Bitcoin due to increased selling pressure, Ki-Young Ju, however, recently claimed that the premium on the exchange Coinbase has risen to over $66.

On previous occasions, every time the premium on Coinbase rose above $50, the Bitcoin price got a boost. Therefore, Ki-Young Ju states that the metric has become an important gauge of the market trend for the short term.

It seems Coinbase whales are starting to buy $BTC. Now Coinbase Premium is +$66.