Bitcoin’s price performance has been relatively stable in recent weeks. Since the beginning of June, the cryptocurrency has been trading in the $9,200 range, which is the price at the time of release. However, Bitcoin is showing bullish signals, which could indicate the imminent arrival of a bull market.

According to a report from the exchange Kraken, Bitcoin is just a 10% jump away from entering a massive upward trend. As Kraken describes, in order to enter a bull market, Bitcoin needs to break the important resistance at $10,500, as shown below.

In this sense, the report says that Bitcoin should break the resistance soon or risk testing the support for $6,000 to $7,000. This would end a period that some analysts have called a very stable period. Indeed, this is similar to the price development in 2016 and 2017, when Bitcoin initially trended sideways for a very long time and ultimately reached its all-time high at $20,000 towards the end of 2017.

According to the analyst Moon Capital, the Bitcoin hash ribbons have crossed and therefore revealed a massive buy signal which historically has driven up the price of Bitcoin. The signal was also present prior to the bull run of 2017. Therefore, the analyst predicts that BTC will rise to $288,000.

Capriole’s Digital Asset Manager, Charles Edwards, also noted the formation of the above indicator. However, Edwards recommended waiting until midnight (UTC) today, 12 July, to confirm the appearance of the “hash ribbons”. He also said that the BTC price should close above $9,230.

On the other hand, Bitcoin’s fundamentals seem to support a bull market. The Bitcoin hash rate has been on a rise since the difficulty adjustment in June. According to blockchain.com, Bitcoin’s hash rate reached a new high on July 7 at 125.99 Terra-Hashes per second (TH/s). 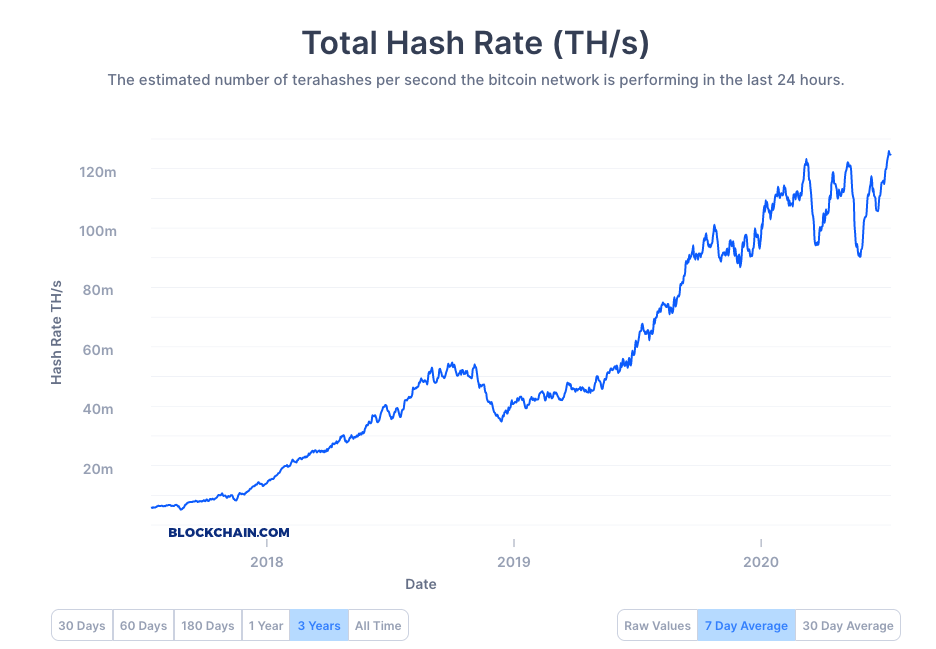 In that regard, the analyst and creator of Bitcoin’s Stock to Flow model, Plan B, stated that Bitcoin has survived the worst of the last few months and is still showing signs of improvement. In addition, he stressed that the cryptocurrency will have a new high in its hash rate soon, highlighting the good health of Bitcoin’s network: