Bitcoin was able to record a strong upward trend in the last few days, rising from USD 9,500 to USD 11,400. At the time of writing, the Bitcoin price has consolidated along the USD 11,000 mark and is trending sideways. The market capitalization has increased from 197 billion USD to 203 billion USD. The Bitcoin dominance is at 62.2%.

Most technical analysts, including Blockroot founder Josh Rager, are bullish on Bitcoin and Ethereum. ETH is currently showing a strong rally and could even show a better performance than Bitcoin in the coming days, according to Rager. On the other hand, BTC could be able to continue the uptrend of the past few days, as Rager explained. His next target for the price of Bitcoin is USD 12,000.

If so, I think Bitcoin sees $12k soon pic.twitter.com/iULfRRudtF

Bitcoin trader Teddy states that Bitcoin has to break through the next strong resistance at the $11,700 level before another rally can follow. However, currently, the trading volume is declining and no new capital is flowing into the market. Teddy therefore urges caution, as a strong rally is often followed by a correction.

“Jonny Moe” agrees with Teddy and states that after breaking through the $11,000 mark on the weekly chart, Bitcoin is moving in a tight price range, at the end of which a breakout up or down will follow. The following chart shows that a significant upward movement could follow in the near future, if the strong resistance along the $11,700 mark can be overcome.

Big Chonis Trading” is also pleasantly surprised by the current price movements, but in a short video update he also points out that a declining trading volume can be observed on the markets and Bitcoin is facing further strong resistance. In his opinion, traders should be especially vigilant at the moment, as no correction has yet occurred after this strong upswing.

According to the data analysis company Glassnode, there is currently no indication that long-term investors will sell parts of their BTC holdings if the Bitcoin price continues to rise. Since March, the latest data show that HODLer has been accumulating more than 50,000 additional BTC every month:

Despite the recent rise in the BTC to $11,000, there is currently no sign of weak hands from long-term investors. Bitcoin Hodler’s net position change since the end of March remains positive, with Hodler currently accumulating more than 50,000 BTC per month.

The following chart shows these developments in detail. 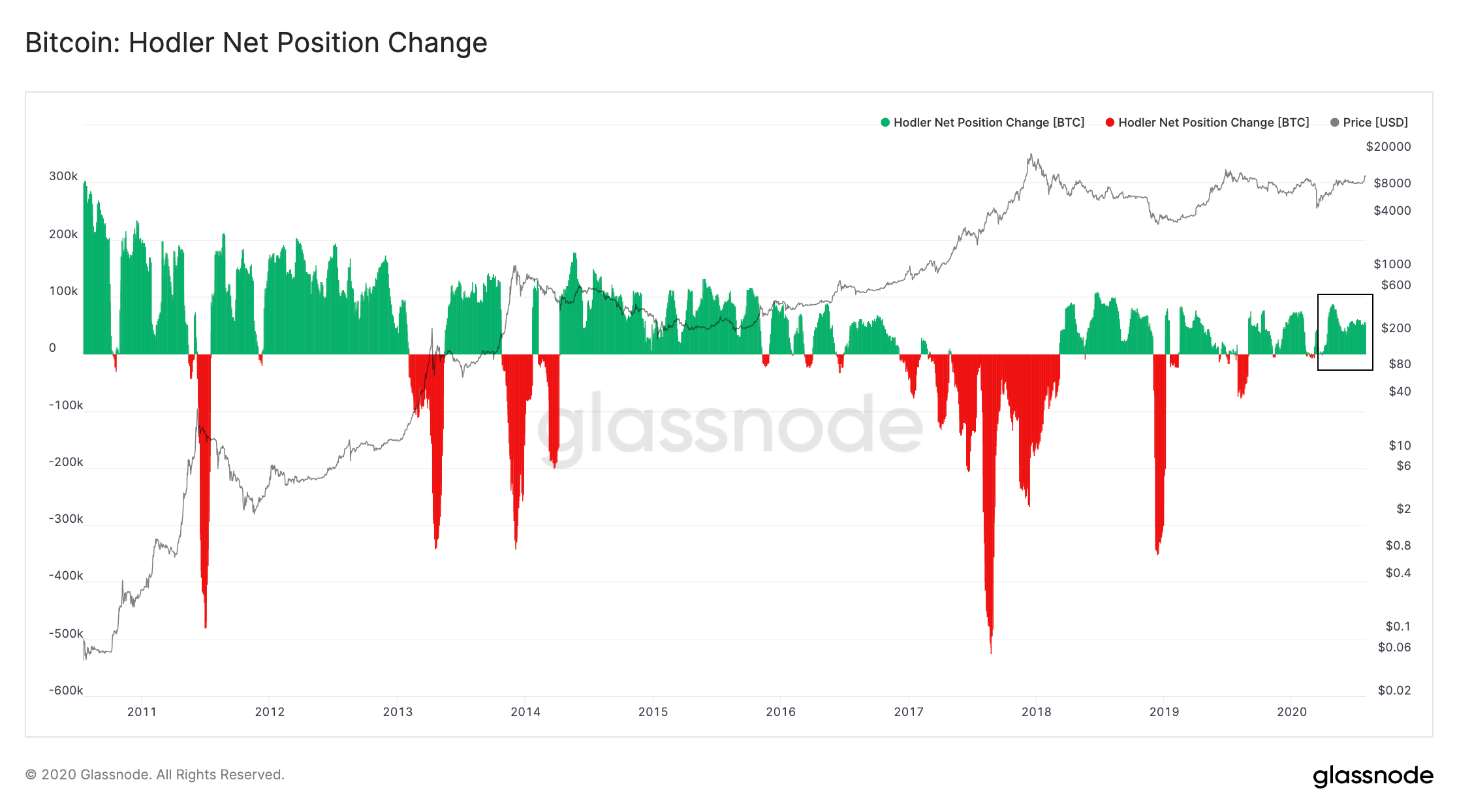 The Bitcoin adoption profited of COVID-19

Tyler Winklevoss, co-founder of Gemini and Bitcoin billionaire, expressed that the ongoing Corona pandemic has significantly increased the adoption of Bitcoin and the use and acceptance of cryptocurrencies. Bitcoin can help local people in emerging markets in particular to protect their capital from hyperinflation, such as in Venezuela.

The pandemic has catapulted us into the future. Hastening failure of offline retail, uptake in streaming, social media…also exposing structural problems w/ fiat, ballooning debt-to-GDP ratios, and likelihood of hyperinflation — which means it's accelerating #Bitcoin adoption.