Bitcoin has continued its recovery from the dip it saw just a week ago. The top crypto has shot up by over $4,000 in the past 24 hours to hit a new two-week high. BTC is trading at $57,706 at press time, up by just over 6 percent in the past 24 hours. The crypto has shrugged off the expiry of $4 billion in options which historically has dragged its price down.

As Crypto News Flash reported on April 23, Bitcoin dipped below $50,000 for the first time since late February. At the time, Bitcoin had been bleeding for nine days since hitting its all-time high at $64,940. However, once the Coinbase IPO hype died down, Bitcoin’s price followed it.

The top crypto is now back on the green. 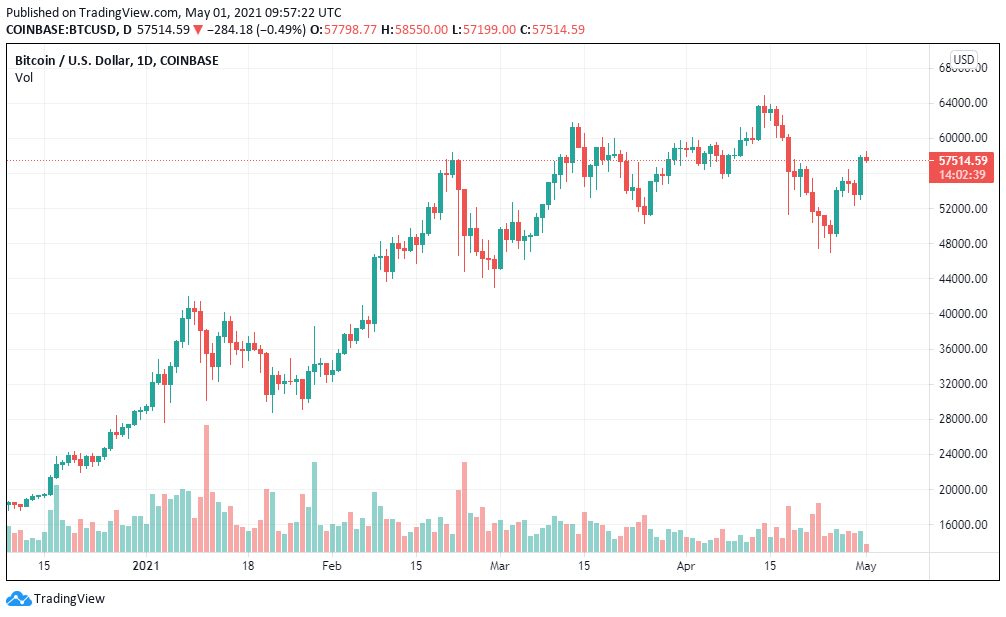 Steve Ehrlich, the CEO of Voyager Digital, a New York crypto broker, explained the options phenomenon, stating, “Historically, we have seen prices drop in the days leading up to bitcoin options expiry, only to rebound afterward, confirming the continued bullishness around bitcoin.”

We can look to the bitcoin options expiry in February as an example: we saw the price close around $57,540 on the Monday of the week of expiry and watched it fall steadily to around $46,340 by Friday, February 26, 2021, the day of the expiry.

Afterward, we saw the price shoot back up, even breaking the $60,000 mark less than a month later on March 13. So while we experience a price drop in the days leading up to expiry, the bullishness around bitcoin picks the price back up thereafter.

One of the reasons that analysts have given for the strong rally despite the options expiry is the rising interest in BTC, both by retail and institutional traders. According to Santiment, an on-chain analytics platform, Bitcoin whales accumulated 90,000 BTC, worth $4.3 million in April.

🐳 The uber large #Bitcoin whale addresses (holding 10k+ $BTC) continue to get richer and accumulate as prices range, particularly after the #AllTimeHigh two weeks ago. Around 90k $BTC ($4.92B) has been added in total to these addresses since April 5th. https://t.co/XXDZ7l2br2 pic.twitter.com/aJDwEc5Quf

The accumulation was despite the increasing volatility Bitcoin saw in April. The month saw Bitcoin’s dominance drop below 50 percent for the first time since the 2018 altcoin boom. In April, Tesla also sold some of its BTC, an event many in crypto criticized. CEO Elon Musk came out to defend the move, but his explanation fell short for many. However, this didn’t move the whales.

So am I understanding this correctly? @elonmusk buys #bitcoin. Then he pumps it. It goes up. Then he dumps it and make a fortune. Listen I own 1 #Bitcoin but #bitcoin is exactly who we thought it was. Just don’t be last 1 #HODLing the bag.

Altcoins have not been left behind either. Most altcoins have recorded a price rise in the past 24 hours, with Dogecoin leading the top 20 coins in 24-hour gains. Dogecoin, a crypto that has become the center of a heated debate in the industry, gained 14 percent.

[Also Read: Dogecoin – loved and hated in equal measure. But here’s why it’s crucial to crypto]

Bitcoin Cash at 7.8 percent, Bitcoin SV at 7.5 percent, Ethereum Classic at 12 percent and Compound at 16 percent were the other big gainers.