In October last year, China’s President Xi Jinping gave a highly noted speech in which he said that China must “seize the opportunities” that arise from the blockchain. Contrary to the first hype, however, Jinping opposed cryptocurrencies and spoke out in favor of the blockchain technology. One cryptocurrency that has already received recognition from the Chinese government in recent months is VeChain and its VeChainThor blockchain. This seems to continue now.

As the latest news from the Middle Kingdom reveals, the largest state-controlled media company, China Media Group (CMG), is promoting the adaptation and acceptance of VeChain. The predominant state-owned media company for radio and television broadcasts, also known as the “Voice of China”, has published numerous informative videos about VeChain as part of the first Chinese state-run 5G app “Yangshipin”.

The platform was only released in November 2019 and informs the inhabitants of the country about new media and technologies such as 5G, 4K as well as 8K, artificial intelligence and now also Blockchain. Yangshipin offers mainly short videos. In addition, Internet users can watch long videos and mobile live broadcasts. Currently, the app has nearly 100 million downloads, reaching a significant number of Chinese citizens.

VeChain could thus gain more acceptance among Chinese companies and citizens through the app, virtually through government propaganda. The app could contribute to the fact that VeChain becomes better known in China and therefore find a wider audience. At the same time, the inhabitants can learn more about the innovative possibilities that arise from VeChainThor blockchain.

As the website shows, Yangshipin offers numerous videos, among others about VeChain’s partnership with DNV GL and the VeChain Pro app. In each of the up to three minute videos a different use case of the VeChainThor blockchain is explained. 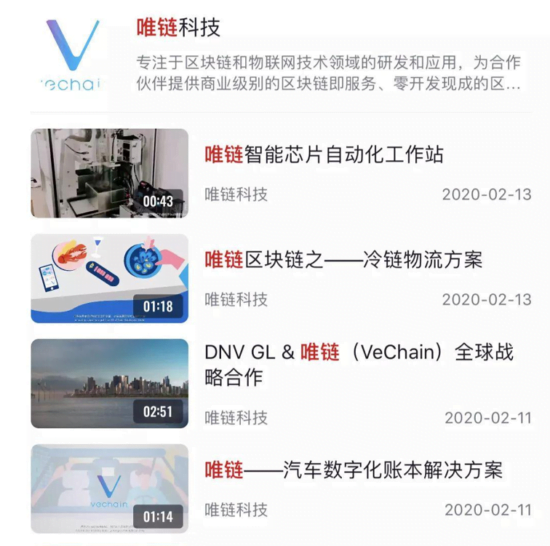 Already in mid-December the VeChain Foundation entered into a partnership with the General Council of Anhui Tea Industry Association. The partnership was signed during a forum for poverty reduction in the Chinese district of Yuexi and aims to promote the growth of the tea industry in the Chinese province by using the VeChainThor blockchain technology.

When announcing this partnership, the VeChain Foundation emphasized its acceptance by the Chinese government. As stated in the official announcement at that time, the VeChainThor Blockchain fulfills the objectives declared by China’s President, Xi Jinping, for the use of the blockchain:

The cooperation between VeChain and the Anhui Tea Industry Association is in line with the government’s goal to increase the competitiveness of all stakeholders in the industry through blockchain technology. With VeChain technology, tea producers and stakeholders can benefit from greater efficiency and productivity at all stages of the supply chain and traceability, which will strengthen the national and international presence of the Chinese tea industry.