Since the launch of Bitcoin futures and derivatives trading, Bitcoin’s volatility has increased sharply and caused large price fluctuations. The trading volumes of the Deribit, BitMEX and CME and Bakkt exchanges continue to show strong growth.

BitMEX is suspected to have played a major role in the last flash crash of Bitcoin, as long contracts worth more than USD 100 million were liquidated over the weekend. Large financial institutions and banks have been monitoring current market developments for some time and are exploring the launch of further Bitcoin financial products. JP Morgan is thinking about launching Bitcoin options, according to a new report.

Back in 2017 and 2018, Jamie Dimon, CEO of JP Morgan railed against Bitcoin, calling the cryptocurrency a fraud that the governments of the world will “smash”. However, that opinion has changed to this day. A new report from JP Morgan “Global Research” covers 74 pages and examines the current developments in the crypto market in more detail.

Aggregated open interest across the leading exchanges rose to a new record high at the beginning of February. JP Morgan also concludes that demand for Bitcoin financial products continues to grow, especially among institutional investors:

The combined option open interest at Derebit/LedgerX is decent at around $500mn, in dollar terms around half of the futures open interest we see at Bitmex and CME together (Figure 2). This suggests that there is genuine demand for non-linear institutional trading products in crypto markets.

The following graph of the report illustrates this relationship and shows the current trend: 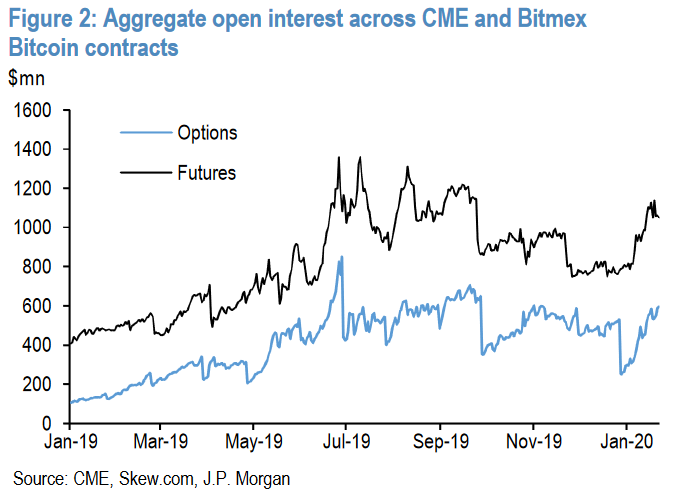 Although it is at this stage rather unlikely that JP Morgan itself will offer Bitcoin options in the near future, the interest of the banking giant shows the progressive adaptation of Bitcoin as an alternative investment product. According to JP Morgan, demand has increased, especially for institutional trading products.

If it isn't obvious, the more we see products like this get offered the more bearish it is for the majority of alts. https://t.co/1e7xL1kZK3

As Crypto News Flash has already reported, JP Morgan is in active negotiations with the Ethereum development studio ConsenSys. According to the report, a merger of the development unit “Quorum” of JPMorgan and ConsenSys could be in the offing.

Quorum forms the basis of JPMorgan’s Interbank Information Network (IIN), which has been expanded to a network of 320 banks that exchange global payment data via the block chain. The joint development of new block-chain-based products could therefore have far-reaching effects on the banking landscape in the United States.