In an interview with Yahoo! Finance, Ark Invest co-founder Cathie Wood was overly bullish on Bitcoin. She called Bitcoin a “much bigger idea” than Apple and Amazon, the two most valuable companies in the United States.

What Wood finds remarkable about the current bull run is that a relatively low level of speculation is influencing the market, except for the last few days when Elon Musk and WallStreetBets have exerted a greater or lesser influence. Wood sees institutional investors, who have made their investments public over the past year, as the most important factor in the growth of the Bitcoin market.

This is “fascinating” but not surprising, Wood argues. For institutions, Bitcoin offers a way to diversify the portfolio with less risk because of its low correlation with other asset classes.

[…] because if you look at the correlation of Bitcoin’s performance relatively to any other asset class, it has the lowest correlation – meaning if you buy some Bitcoin, you will further diversify your portfolio and increase your returns with lower risk.

Bitcoin is ready for institutional adoption

According to Wood, MicroStrategy’s bet on Bitcoin is a “crazy” one, as regulators will wonder if it is the “MicroStrategy Technology Company or an ETF-like offering” given the stock offering. That being said, Wood does expect more companies to follow the lead of Square and others to invest some of their cash reserves in Bitcoin.

The biggest surprise for Wood is MassMutual’s entry into the Bitcoin market. The Massachusetts-based company bought 100 million worth of Bitcoin in mid-December and is the most important “seal of approval” for Bitcoin so far, she said:

MassMutual is very conservative and very highly regulated, and it had to jump through many more regulatory hurdles than I thought would have been possible by now. So I think it’s a seal of approval.

Bitcoin “is the first global, truly global, digital currency out there,” @ARKinvest CEO @CathieDWood says. “It is completely decentralized. There is no throat to choke.” pic.twitter.com/nniOdL2SM6

In its “Big Ideas 2021” report released last week, Ark Invest estimates that the Bitcoin price could rise above $400,000 if it replaces 10% of the cash reserves of all S&P500 companies. 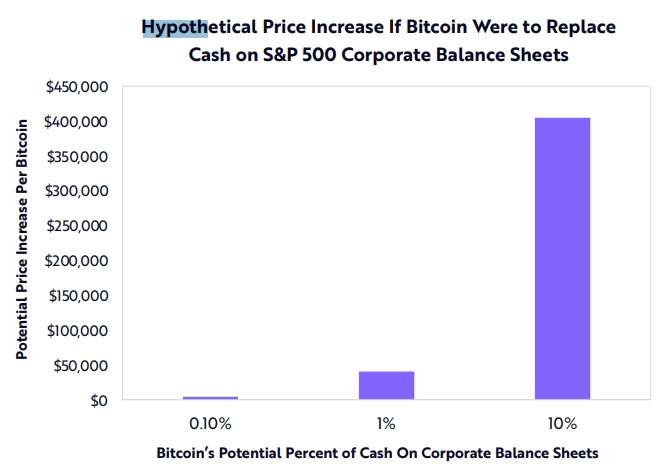