Whether you hold Cardano (ADA) already or not, there is good news!

Because after reading this short article, you will know 5 solid reasons why ADA could be your next ride on the #21cryptobull.

Here’s the first one:

Major gates are opening for retail traders: Buying ADA is getting easy

Revolut which is one of the major digital banking apps in EU and UK has just announced that they will allow their more than 12 million users to buy ADA on their app.

What do you think that’ll do to the price? Up, up, up…

There’s obviously no guarantee for an increase in price, and please, make your own analysis (this is not investment advice), but with this many users now having access to buy ADA there are factually more people that now conveniently can buy ADA.

ADA is getting more and more popular in the retail world, and with what you’re about to read now, you’ll see that even governments are starting to flirt with ADA…

Does that not sound big? Again I’ll ask you (sorry to make you think for yourself), what do you think that’ll do for the price of ADA?

This deal was supposedly fully signed by the Ethiopian minister and Charles Hoskinson, the inventor of Cardano, as revealed in a tweet on April 04th, meaning that the world’s largest deployment of blockchain in Ethiopia could soon become a reality.

The project called Atala PRISM, will be a decentralized identity solution based on the Cardano Blockchain. It will allow Ethiopians to own their personal data and interact with organizations seamlessly, privately and securely. This will be the largest “real-world use case” in the history of blockchain.

Can you think of anything else that could have as big an impact on ADA’s price?

I can’t, but there’s another solid indication of ADA’s upward trend if you look at this powerful tool.

Can any tool or software predict the price movement of ADA? No. But here’s the tool that is closest to being your very own crypto crystal ball: 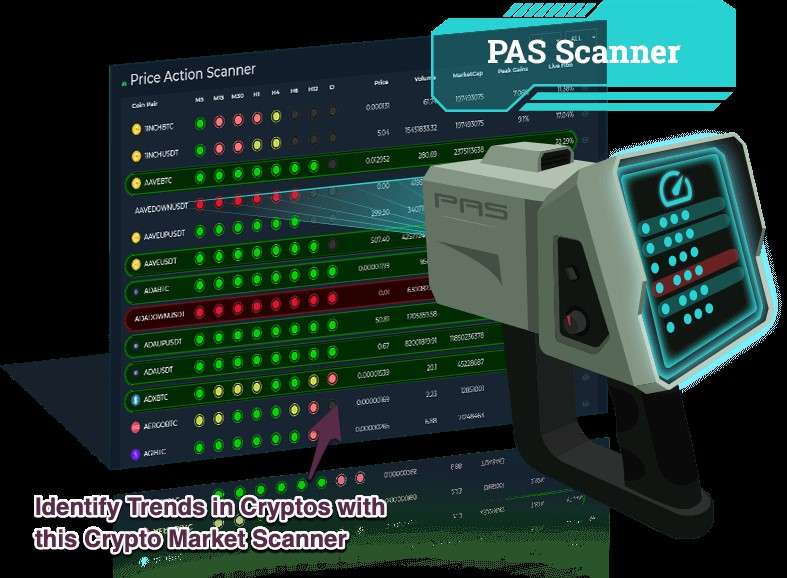 If the trend is downward, the given light will be red (the stronger downtrend, the more bright red).

When there’s an upward trend, the stronger the trend, the brighter the green.

This simple but yet sophisticated scanner shows a strong upward trend for ADAUSDT across ALL timeframes.

Time and time again we’ve been able to count on this scanner for knowing when to buy or sell a coin. So I put my faith in ProfitFarmers (the company behind them) yet again.

In the past, you had to pay $300 a month to get access to this fortune-teller of a tool, but recently the company behind them gave full access to the scanners, including crypto signals, in their Free Moonbag Kit.

With the Price Action Scanner we’re even more confident that ADA is going north! But what’s another reason we could see a move?

Long consolidation (stagnant price for a period) usually means the price is about to go significantly UP or DOWN.

ADAUSDT remains in extended consolidation under February’s ATH at $1.54. On Mar. 18 ADA made another attempt to break above the resistance at the all-time highs, but the rally stalled short at $1.51. After this ADA returned into the range between $1.03 and $1.36 and has not moved above for a good while.

Compare ADA’s price movement to for example XRP’s big move up and TRX’s +100% 30 days price movement, and you can quickly get a feel for why there’s room for growth of Cardano’s price!

Considering that the price is consolidating and the Price Action Scanner is showing an upward trend (go see the trend yourself here) you could argue that the next move is going to be up.

I don’t want to bore you… But this is pretty big news!

In the summer of this year, a whole new upgrade to Cardano will be implemented.

“Alonzo” (not Alladin) is the name of the upgrade, and the level-up will open opportunities for smart contracts and decentralized finance (DeFi and DApps) on Cardano.

This gives Cardano a whole new level of usability. It looks like Ethereum, the coin that by market cap is 6 times bigger than ADA (approx. $245 bill. vs. $38 bill.) will be having an even stronger competitor when Alonzo enters the game.

The technical indicator, and oftentimes suspiciously precise Price Action Scanner clearly shows an upward trend. ProfitFarmers, the company behind the scanner, has time and time again, shown to be extremely good at predicting the volatile crypto market.

In this case, the technical based upward trend on the scanners pairs up well with the positive fundamental news covered in this article.

Is ADA gonna be your next ride on the #21cryptobull? I hope you know better now. As always, make your own analysis, and then I’ll highly recommend you to get the free scanners from ProfitFarmers to analyze the trends of crypto’s yourself.