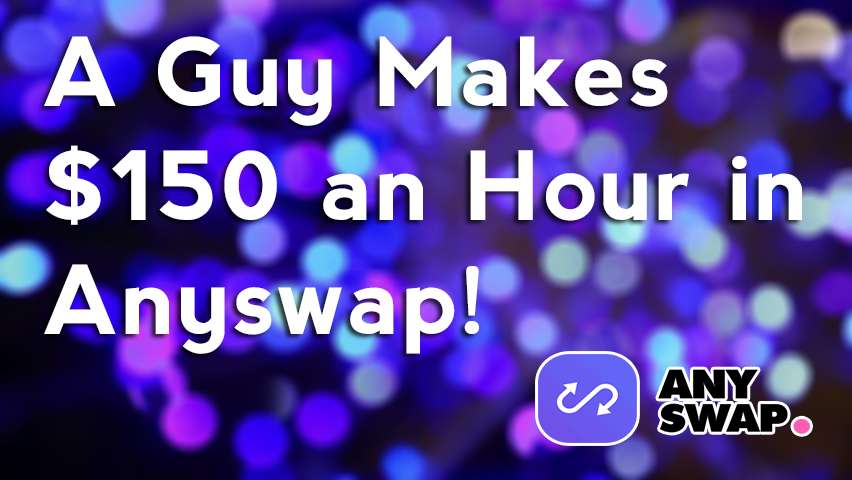 DeFi, DeFi, and more DeFi. The cryptocurrency market is entirely engulfed by the new sector’s sudden rise in 2020. In June, investors locked only $1 billion in collateral. Only three months later, a DeFi ‘craze’ led to investors locking almost $10 billion into the sector. Brought by yield farming and their enticing APY rates, the cryptocurrency quickly flocked to the new center of money. But the question is, how and where? According to one successful enthusiast on Crypto Twitter, the yield farmer makes $150 on the AnySwap platform. Based on the Fusion blockchain, AnySwap is a decentralized exchange launched in July that offers token swapping, liquidity farming, bridging, and much more.

Moreover, the platform is one of the only DEXs to reward users with its native governance token. Everyone who participates and actively uses the platform can earn free ANY when using functions such as swapping and yield farming for an additional flow of passive income. Another important thing is that users pay minimal gas fees. With the lowest gas fees on any platform, AnySwap charges 100k lower fees compared to Ethereum via the Fusion network, as a result of lower network congestion.

The anonymous yield farmer revealed that he approximately made $150 on the platform every hour by joining one specific liquidity pool. Currently, there are 3 liquidity pools farmers can use via the Fusion token FSN/ANY, FSN/aUSDT, and FSN/aETH.

To remove the risk of impermanent loss during the recent wave of volatility in the crypto market, he utilized the FSN/aUSDT liquidity pool. According to the DEX, Anyswap hosts around $6.58 million in their liquidity pools.

Based on his locked collateral, which he chose not to publicly disclose, and the 0.3% reward farmers earn from users swapping tokens, the farmer earned $150 per hour. In essence, he earns $3,600 per day which translates to $25,200 every week and $108,000 a month! The lucky farmer noted: “It’s more than passive income, DeFi platforms like this can replace my usual earnings from traditional job prospects.”

What contributed to his rewards was also the fact that the DEX shares ANY tokens to users. Around 25% of the total supply of ANY is allocated for trading rewards. Even swap traders receive ANY, 250 tokens per 100 Fusion blocks to be exact, which takes 22 minutes.

How safe is it?

Some may ask the question, how safe is it to yield farm on AnySwap really? Well, the truth is that you can expect a ton from a newly launched DEX. Behind AnySwap is co-founder Dejun Qian, who was one of the first movers in the blockchain and mining industry in China. Moreover, he founded the cross-chain finance blockchain project Fusion, one of the first decentralized finance platforms. His reputation is also backed by the fact that he founded BitSe. The company is famous for creating popular blockchain projects QTUM and VeChain.

Therefore not only is the DEX not founded by an anonymous team, but it is also led by one of the most respectable developers in the world of blockchain technology. As for the risks on the AnySwap platform itself, future farmers do not need to worry. With some of the lowest gas fees and an engaging reward program, farmers are bound to earn money.

Traders familiar with the market can also rely on AnySwap’s stablecoin liquidity pools. Their nature provides almost no risk of impermanent loss. Utilizing Fusion’s Decentralized Control Rights Management (DCRM) technology, farmers should also have no fear of losing assets. The innovative feature holds and manages cryptocurrency assets as a decentralized custodian. This ensures that your holdings are safer than traditional software wallets.

Previous ArticleBitcoin price may test yearly high if it closes the week above $10,400
Next Article TRON joins forces with 1inch, expands Defi ecosystem