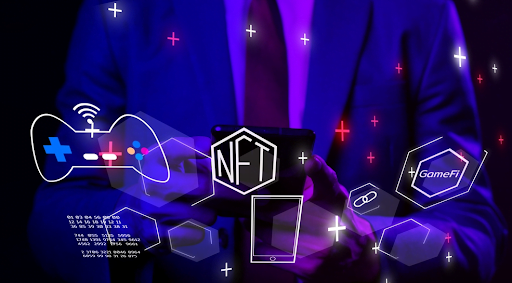 Over the past few years, the use of cryptocurrency in games has rapidly grown in prevalence, leading many people to search for the best blockchain games.

Throughout this guide, we’ll be sharing our top picks for the best blockchain games and explaining the ins and outs of each project. Let’s get started.

The Best Crypto Games to Play and Earn – Our Picks

Below, we’ve included a brief blockchain games list with a quick explanation of each project. We’ve also included a detailed review on each further down the page.

While The Sandbox and Decentraland have taken center stage in the metaverse, a new blockchain game, RobotEra, could be set to unseat them thanks to its impressive suite of building tools and range of monetization options.

The project’s native token, TARO, was recently released as a presale and has been garnering the attention of investors everywhere. 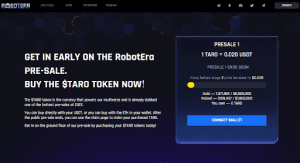 The RobotEra metaverse is split into seven different plots of land known as continents. Players are free to explore this land, mining for resources used to craft customizable robot companions that can be sold on the in-built NFT marketplace.

Furthermore, it’s possible to build huge constructs on this land using the vast array of custom tools offered by RobotEra – thanks to its zero-code approach, just about anyone can utilize RobotEra’s tools to create intricate play-to-earn (P2E) games as well as huge buildings like museums and palaces. Check out the RobotEra whitepaper to learn more.

To keep things running smoothly for players, the majority of RobotEra assets take the form of NFTs on the Ethereum network. This ensures that items can be traded with ease and means that any customizations to land or robot companions will remain when traded, creating even more opportunities to earn. 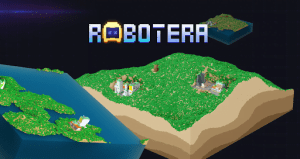 Being one of the top blockchain games and among the coolest NFT projects, RobotEra has a strong token at its core – TARO is based on the ERC architecture and boasts a fixed supply of 1.8 billion, 270 million (15%) of which are reserved for presale investors.

TARO can be staked to earn rewards and the token is also used for governance purposes, with holders able to vote on decisions that impact the project’s future.

Investors wondering how to invest in this new blockchain game can do some via its three-stage presale. TARO will initially be available for $0.020 but will increase to $0.025, before hitting $0.032 during its final stage, a 60% increase from the current price.

Check out the RobotEra presale now to secure TARO tokens for the best price possible. Join the RobotEra Telegram to stay informed of any updates.

Another contender for the title of best blockchain game is Calvaria (RIA), a crypto battle-card game with the potential to disrupt the eSports scene in a big way.

The project’s native RIA token is currently available as an early-stage presale that has already raised an outstanding sum of over $1.8 million.

Calvaria allows players to battle it out in high-stakes card games similar to Hearthstone, with players building a deck of NFT-based cards, each boasting different stats.

When a player wins a match they can earn rewards paid in eRIA. While the P2E variant of Calvaria will require players to purchase NFT cards, there is also a free version of the game with any P2E elements removed.

The Calvaria team has opted to build the project on the Polygon network, meaning the game will benefit from Ethereum’s security while transactions remain cheap and the game scalable. By using NFTs, Calvaria has also made it possible to easily buy, sell, and trade cards, helping to foster a strong in-game economy.

There are two different tokens at the heart of the Calvaria ecosystem, RIA and eRIA (earned RIA). The former can be used to purchase new cards or decks, staked to earn rewards, or used to gain voting rights regarding upcoming decisions related to the game. The latter, eRIA, is distributed to players as a reward and can be used to pay for upgrades to cards.

To ensure that everyone has ample opportunity to get their hands on RIA, the token has been made available to investors as part of a 10-stage presale.

Right now, the presale is in its fourth stage with tokens selling for $$0.025, however, during each stage the price of RIA will rise by $0.005 up to $0.055 during the tenth stage – a 120% increase from the current price – affording early supporters the best value. 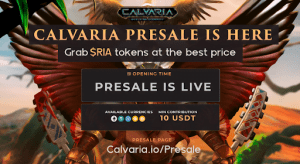 It’s easy to see why Calvaria is considered by so many to be one of the best blockchain games on the market. This new cryptocurrency project has already attracted a large number of investment with more likely to get involved following the game’s full release. Check out the Calvaria presale now, before the next price increase.

Join the Calvaria Telegram group to keep informed regarding any updates and check out the Calvaria whitepaper to learn more about this innovative new blockchain game.

3. Tamadoge – Battle and Train Tamadoge Pets in an Expansive Metaverse

Next on our list of the best blockchain games is Tamadoge (TAMA), a play-to-earn project letting people earn crypto rewards for rising and battling NFT-based pets within an expansive metaverse world.

The project recently stunned inventors after the TAMA token sold out its $19 million presale before going on to be listed on several high-profile exchanges. 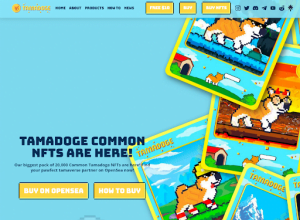 Being one of the top blockchain games available, Tamadoge boasts gameplay likely to engage and excite its audience. While exploring the vast metaverse world, players can interact with 3D-animated pets, leveling them up using items from the in-game store.

Whenever a player levels up their NFT pet, they will receive Dogepoints which determine a player’s ranking on the in-game leaderboard. As a player climbs this leaderboard, they become entitled to a larger share of the rewards pool. This results in players purchasing more items from the TAMA store, making TAMA deflationary and reducing the supply by triggering the 5% burn on in-store revenue.

While Tamadoge is already an interesting project, it’s expected to receive even more utility in the near future. On top of its flagship game, a series of Tamadoge arcade games is expected to release in Q3 2023 before an augmented reality (AR) app allowing users to interact with their pets from a mobile device is released in Q4 2023. 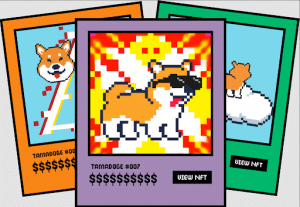 The ERC-20 TAMA token powers the Tamadoge ecosystem. The token is completely taxless and features a maximum supply of 2 billion, meaning that it’s great for trading, likely a contributing factor for it being listed on well-known platforms like OKX and Gate. Check out the Tamaodge whitepaper to learn more about this intriguing token.

Tamadoge could be the best blockchain game for investors. After the TAMA token was listed on OKX, it surged to $0.197 and while the price has now dropped back down, we could see some explosive growth from TAMA once the market begins to recover, making it one of the best long-term cryptos to buy right now.

Join the Tamadoge Telegram group to keep to date with any new developments.

Axie Infinity (AXS) was one of the top blockchain games by market capitalization and player count at its peak. The project allows players to train and battle monsters, taking inspiration from games like Pokemon.

At its peak, the AXS token was worth around $160, and, now trading for just $6.40, the project could present a strong opportunity for risk-tolerant investors. 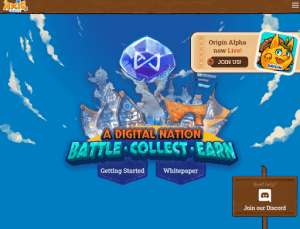 Utilizing NFTs for its in-game assets, Axie Infinity monsters (known as Axies) are unique and can be traded with ease with some players breeding the NFT monsters to earn a living. Outside of being available to earn AXS through battles, players can sell Axies on the P2P Axie marketplace.

Axie Infinity took the world by storm when investors piled into the crypto market during the 2021 bull run. While the project has since declined in terms of user count, we could see a resurgence as the market recovers, making Axie Infinity worth keeping an eye on.

DeFi Kingdoms (JEWEL) aimed to do things differently from other new blockchain games.

The Harmony-based project centered around a virtual world known as Serendale (although a new land created on the Avalanche blockchain called Crystalvale has since been released). 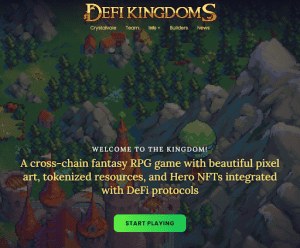 The primary aim of DeFi Kingdoms was to blend crypto games and decentralized finance (DeFi) to create a game that rewards its users. As such, DeFi Kingdoms offers a number of ways to earn.

On top of questing for crypto rewards, players can lock funds in liquidity pools to passively earn crypto, boosting the total value locked in the DeFi Kingdoms ecosystem.

While the recent crypto winter hasn’t been kind to DeFi Kingdoms, the team is constantly working on new features including lands created on other networks. This will help to attract a larger user base, potentially boosting the price of JEWEL over the long term.

Spider Tanks is arguably the best blockchain game from prominent developer Gala Games. As the name suggests, the gameplay centers around battling spider-shaped tanks that offer players a great deal of customization.

Being created by Gala Games, the project is powered by the GALA token. 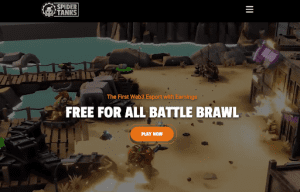 Spider Tanks is a player-vs-player arena brawler that rewards players for winning intense matches. Each Spider Tank is fully customizable and takes the form of an NFT, meaning they can be bought and sold on the Gala marketplace. While technically a free-to-play game, players must purchase tanks to partake in matches.

Spider Tanks is one of the best blockchain games created by Gala Games. Thanks to the project’s engaging and highly competitive gameplay, we could see Spider Tanks become a eSports, something that would likely boost the value of the GALA token significantly.

Throughout this guide, we’ve looked at 6 of the best blockchain games on the market right now.

However, after conducting our research we’ve determined a particular game with the greatest potential.

Thanks to its innovative creator tools and wide range of earning opportunities, RobotEra could grow to dominate the metaverse.

As such, it could be worth checking out the presale and stocking up on TARO tokens while they’re still available at a comparative discount.